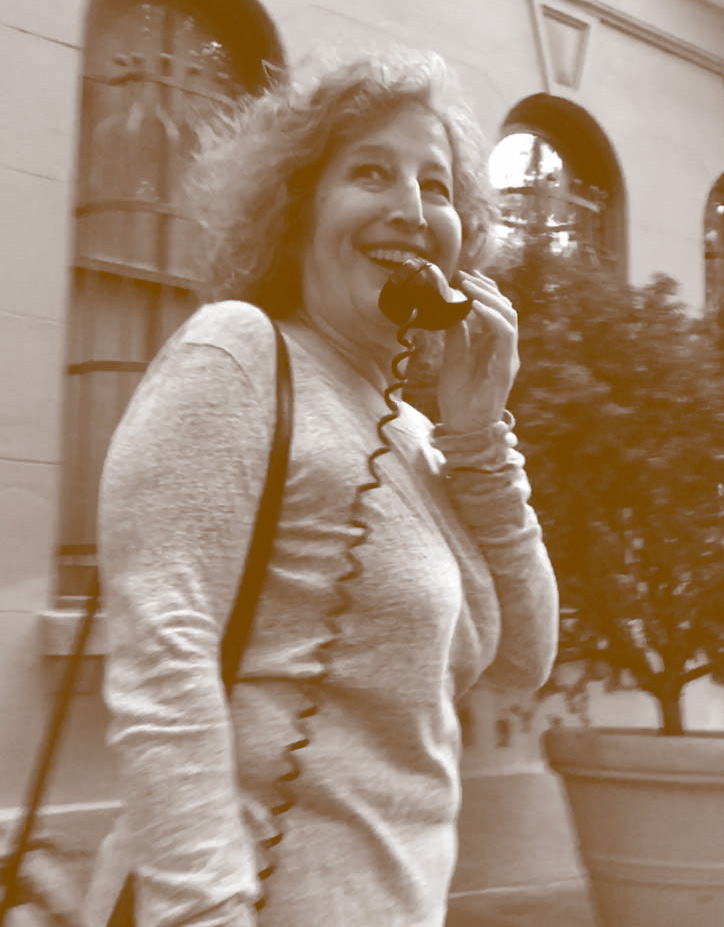 [Transcript of video]
I want to thank Cory Fraiman-Lott who took all of these images which I’ll show towards the end. This whole thing has been really fun, despite my being cranky this morning because of the disappearance of my images and their return. I’m an ethnographically-inclined cultural geographer, so I use a number of methods in observation. I basically don’t take anything apart. I situate whatever my object of inquiry is — in this case the telephone — in a historical, cultural, political, economic, and spatial context. This artifact is of personal and social significance and that doesn’t require me to touch it or probe its interior. Though as a child — and I am old enough to have had that very same phone — it might have been our phone in my house, but we used to unscrew it and there’s all kinds of red and green and yellow wires in there that Michael will tell us what they’re doing.

But studying it’s thing-ness gives me all kinds of ideas about the phones, time, space, temporal and spatial significance, and these insights made me think about its evolution as a technology and as a social object.

In looking at the phone just sitting in my house — we were supposed to recount our methods of observation — and, as my typical method was I kept it in the bag for like a month, procrastinating, and then I took it out and it was just sitting on my desk, then on the night table, and I just kind of looked at it and admired its thing-ness. But it made me really think about the historical and biographical relationship to phones. I’m looking at it in that kind of context.

And as I mentioned, it’s certainly the exact phone of my childhood, which sat on my mother’s night table. And the wires are short, you can’t get far. I would sit on my parents bed to talk or crouched on the floor between the bed and the night table in a little corner. We did have another phone in the kitchen, a wall phone, but we basically had basic black and rotary.

I thought about its relationship to a body, my body, and anybody. And the household, the way you had to sit near the phone to talk so you’re tethered something unusual for anybody born after 1990. The way it never went unanswered, and there was no call waiting, there was no answering machine.

You answered the phone or you didn’t answer the phone, and if someone was on the phone, they got a busy signal. And so when talking became an activity in itself — when I was an adolescent — I had to sometimes hang up: “People might be calling” or “I have to use the phone” or something like that. In any case, there was little privacy and privacy is something I want to go back to towards the end of what I’m going to talk about. So if my parents came in the room, especially as I reached adolescence, you would hang up or something. And there is a way that the phone was — and this is quite different from today — it was a collective device. As I mentioned, the whole family used that one number and we were privileged enough to have our own number.

We weren’t on a party line — something that most people probably don’t remember or know about — but that’s when you shared the phone line with somebody else. You could pick up the phone and they are talking. You’re supposed to hang up when you hear the neighbors or whoever were talking, but who knows. But I do remember my mother talking and talking, and that meant busy signals for my friends but I couldn’t say to her, get off the phone. But it also modeled a kind of connection to friends, the way my mother talked on the phone. The shape of the receiver, as has been mentioned, allowed her to clean the kitchen while talking, et cetera.

My mode of observation of the phone itself, the kind of using my senses, is that it’s quite heavy. I walked around the city with it — not that anyone cared — but I’ll get to that in a minute. I dialed my childhood number, which of course I remember, and the temporality of the dialing was significant. I really have this embodied memory of that backward and forward of it. When I turned it over, see this little, crude thing: “LOUD” — that makes the ring loud. Now we have that ring on our cell phones for the nostalgic people like me. And in our family we had that basic black — no princess phones, no slim lines, no push buttons until it was mandated. This connects to Michael’s presentation: it became mandated when the connections were made differently. That’s all I know about those connections. They were different.

But then I wanted to interrogate the object itself. So I really thought about that phone before me and thought, like where have you lived? Because if you moved, you returned the phone to the AT&T, American Telephone Telegraph, and then you got a new phone.

This phone lived in a lot of houses and I thought, what conversations have you conveyed? You, my telephone sitting on my desk now. What was the worst thing you ever heard? What was the greatest thing you ever heard? What secrets do you have in you, if we could shake them out of there? How often did people hang up on each other? How many households did you occupy? What was your number?

Mine didn’t have a number. And where were you, always in domestic space or were you in an office? What have you seen? Also, on the bottom — and certainly this I did not know as a kid — it says 11-61. That’s when it was made. I thought what happened in November of 1961? A lot of things happened in November of 1961. Amazing. I googled November 1961, and there’s of course a wikipedia page for November 1961. Among a million things that happened that month, thalidomide was pulled off the market, just to kind of carbon date this thing; U Thant — probably not a household name now — was elected secretary general of the UN; Women Strike for Peace held its first event against Strontium-90 in children’s teeth about nuclear testing, to take that, Trump; and segregation was banned on all interstate public facilities; and finally, the head of Planned Parenthood in Connecticut, Estelle Griswold, and Dr Buxton, who was working there were arrested after opening a birth control clinic which led to the Supreme Court decision that said, the state has no business what people do in their bedroom.

Perhaps this phone was used for organizing some of those things, for conveying the panic around being arrested. Also, I’m curious about the meaning and use of the spaces it has occupied. So the object is a means to think about the social and the spatial. I wanted to think about the past and the present and the future of this 500 phone. I thought about advances in design over the previous phone — my grandparents’ phone — that had the pointy top, you’ve probably seen it in the 40s movie. It didn’t allow you to multitask. It had an even shorter wire and a telephone table — like it had its own sanctioned space in my grandparents’ house that was just to sit and talk on the telephone. Communicating by phone was obviously much more concentrated and much rarer than now, since now everyone seems to be blabbing.

Now, mobile phones — and this is veering towards the end — are ubiquitous, the connection to the body is to a single body, not to a household, not to any fixed geography like the bedroom or the night table, let alone a telephone table. That has utterly altered its appearance, and its use, and the meaning of public and private.

I think that the phones now recreate a sense of what it means to be private in public, and what public spaces. We have all walked the streets of this city and we have all, I am sure, heard some of the most outrageously private kinds of conversations taking place in a public setting.

And what does that do to public and private when people are screaming, and having fights, and talking about their mortgages, and saying their credit card numbers while you are standing there or walking past them?
I wanted to call attention to the fact that people are constantly on their phone, and transforming public space, and transforming their own bodily relationship to a “there”. They are always — we are always — half someplace else, not looking. I personally try and stand still when people are texting and walking towards me so they crash into me, so I can say things like the crappy person I am. So there I was in public space, talking away.

Finally, it was just amazing how rare it was that anybody cared or looked. I was trying to say, “You people that are always on your phones!”, but they were so always on their phones that they never even noticed. This is Westbeth, and that is the site of Bell Labs. Where those very physics things were done. Now, check out the reaction when I get across this street, no doubt from a Westbeth resident.

I felt like “people were not looking, because they were absorbed in their own phones” was itself a finding, in terms of an observation about this. But I really thought that walking down the street with this phone and really talking the whole time, as you could see, would make people think, “Oh right, this is what we do”, but somehow… I mean, I have no idea because, as an ethnographer, I would have interviewed and done other things afterwards, and asked things like “Did that matter to you that I was doing that?”, but I was trying to not do performance art. I was trying to actually engage with the social context of this. And so it was really interesting to see the level of self-absorption and unrequited telephonic love. Thank you.

Cindi Katz is Professor of Geography at the Graduate Center of the City University of New York. Her work concerns social reproduction and the production of space, place and nature; childhood and social insecurity; and the consequences of global economic restructuring for everyday life.