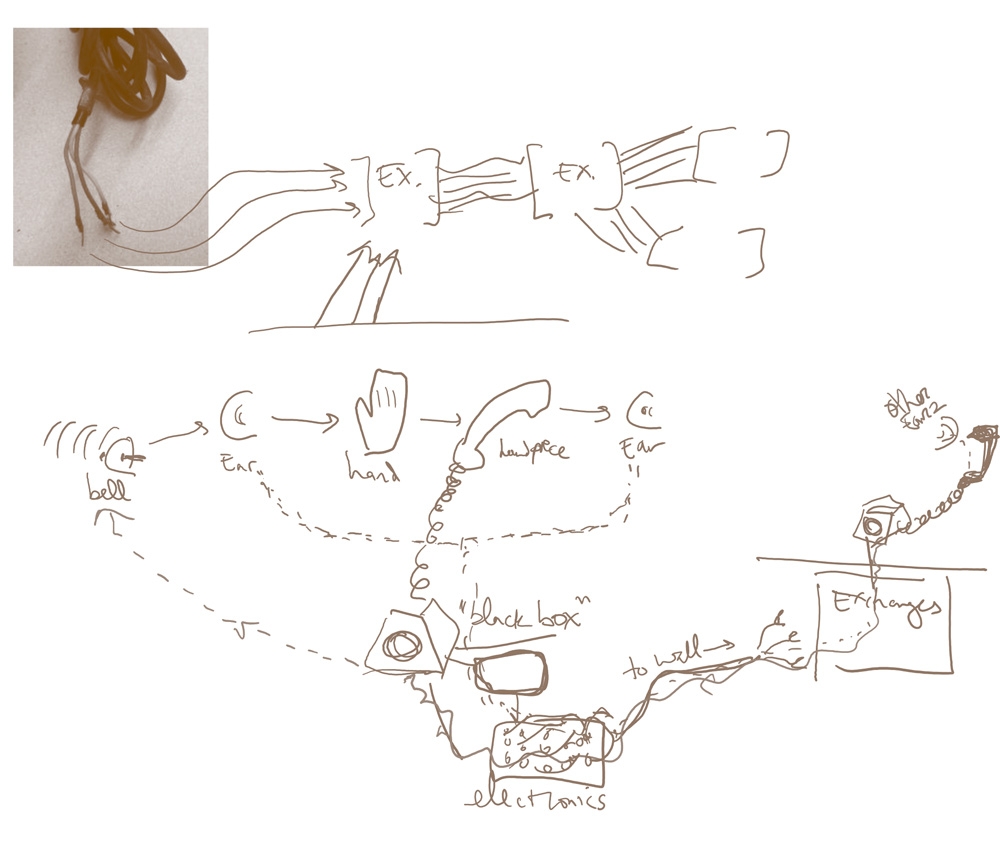 Michael J. Barany — Historian of modern science and mathematics, and is currently a postdoctoral fellow in the Society of Fellows at Dartmouth College

[Transcript of video]
As our hosts have explained, our object — in the sense of goal — is to use our own methods of observation to understand this object here, the Model 500 telephone, that we’re going to be defining over a series of workshops as this sort of meta object, the OBJECT AMERICA.

And the method of observation that I wanted to introduce in this session — one that’s distinctive to historical studies and a number of related disciplines — is the method of inventory. Observation involves a systematic framing or reframing, placing objects in context, deriving information from objects, endowing them with certain features, certain kinds of salience. 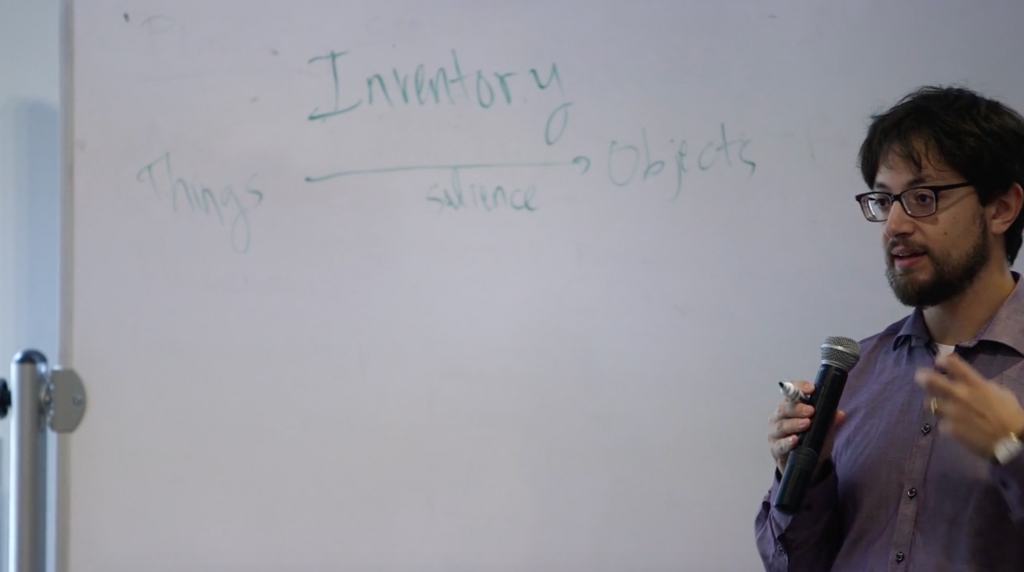 One very general way of defining inventory is transferring things — whatever you might encounter in the world, or in a pile of materials, or some sort of found entities — and transforming them into objects by endowing them with different kinds of salience. And there are many ways to go about inventorying: you can sort, you can interact with objects, you can classify them, you can track different particular types of objects or different features of those objects. 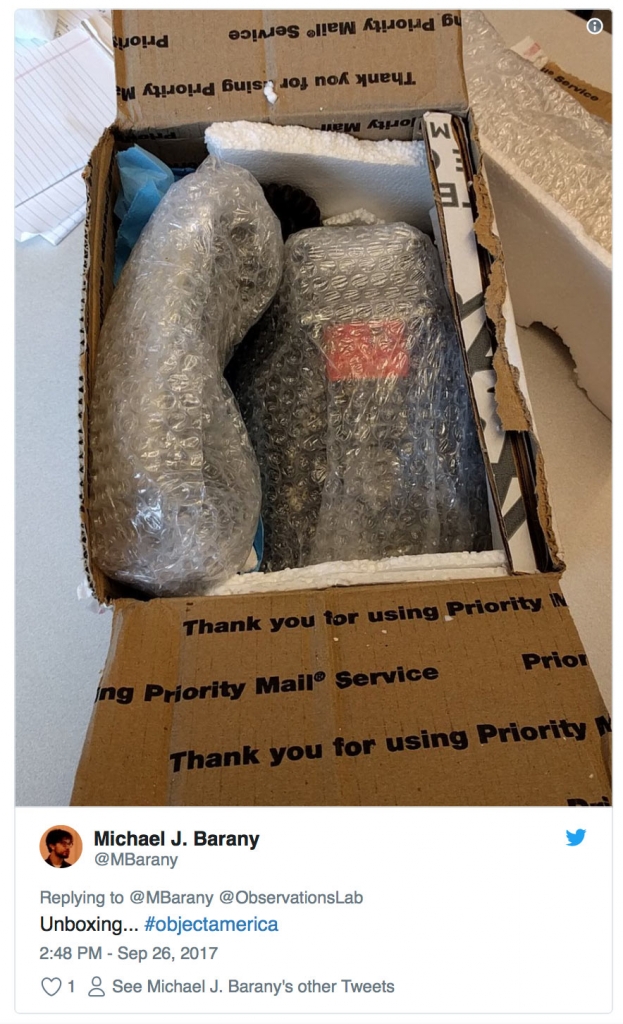 But the general principle of inventorying is taking what you encounter and making of it an object by deriving certain kinds of salience. And the particular kind of salience that I want to focus on for this object is one that comes out of my research on the globalization of mathematics in the mid 20th century, the same period that this phone was being produced. One of the the conclusions that I’ve come to is that, in order to understand the globalization of the discipline of mathematics and the transformation of our understanding of what mathematics is, you have to look to certain fundamental changes in what words and numbers meant in relation to the world in this period.

The best way to understand that is to think about the meanings of the word sense, which is the theme of today’s workshop here. There are three meanings of the word sense that I want to point to. One of them is the meaning of sense as sensation, as an interaction using your bodily senses. Another meaning of the word sense is the context for something, … so just a moment ago I resisted saying, “sense in the sense of sensation”, but it’s that word, sense, that specifies the context through which you understand an object. And then the other sense of sense that I want to point to, is the idea that something makes sense. So that it has a kind of intellectual or epistemic or ontological foundation that fits into a conceptual framework: sense as meaning “foundation”. And the insight of the research that I’m trying to do on the globalization of mathematics is that — in order to understand the relationship between context and foundation — you have to pay very close attention to material or physical and embodied sensation. And the Model 500 telephone is in many ways an ideal way to understand how that process works.

To put it in its historical context, as Pascal indicated, the Model 500 came out of a really extensive and intensive period of research on different designs, on different attempts to understand how human faces interact with the objects they might use to connect to other humans through their respective faces. 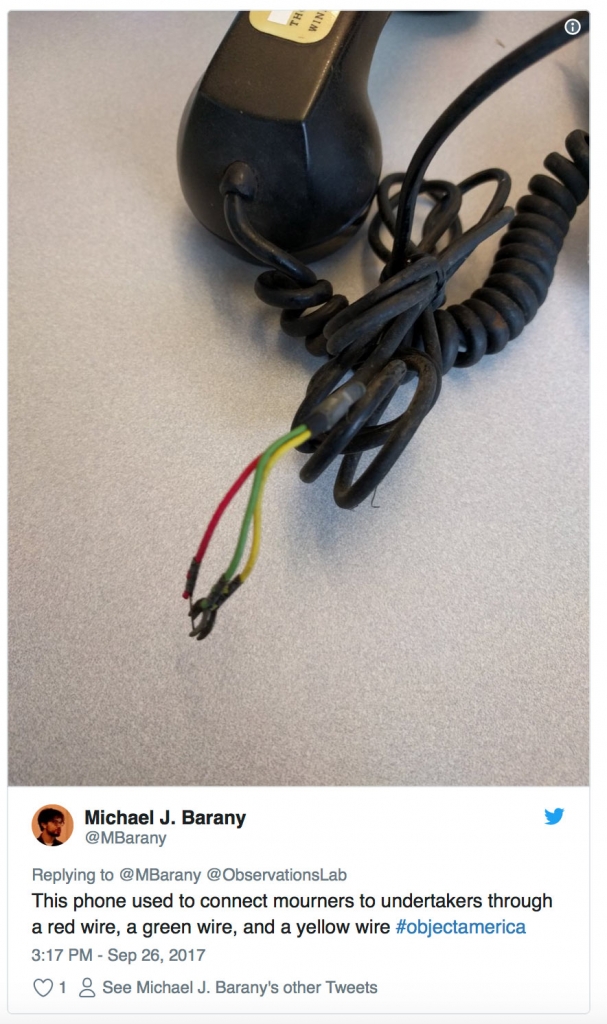 And this comes at a time of economic globalization, of the struggle to make consistent and meaningful interactions across long distances with people and with institutions with which and with whom you might not have a regular ordinary contact. And Bell, the system of companies that produced the telephone, was instrumental not just in the sort of technical foundations of the system of interconnection, but also in the conceptual transformation of this idea of sense that accompanied this period and that made certain kinds of global knowledges possible.

We associate Bell with an infrastructure of telephone wires of these devices which, 50, 60, or 70 years later are still intact and robust and usable — although usually the infrastructure of newer buildings doesn’t quite accommodate them. But Bell — through its subsidiary Bell Laboratories — was also an extremely important home of theoretical thinkers who were changing the idea of the very foundations of knowledge.

So this is one of the key American centers for the emerging science of information theory, of operations research, and of dynamical systems theory. These theoretical changes to the basis of interaction and our understanding of what it means to exchange information and how information might be operationalized through different technologies was fundamental to the kind of conceptual and economic system that the Bell corporations produced in the mid 20th century. And you can access this in a very concrete way through this object. 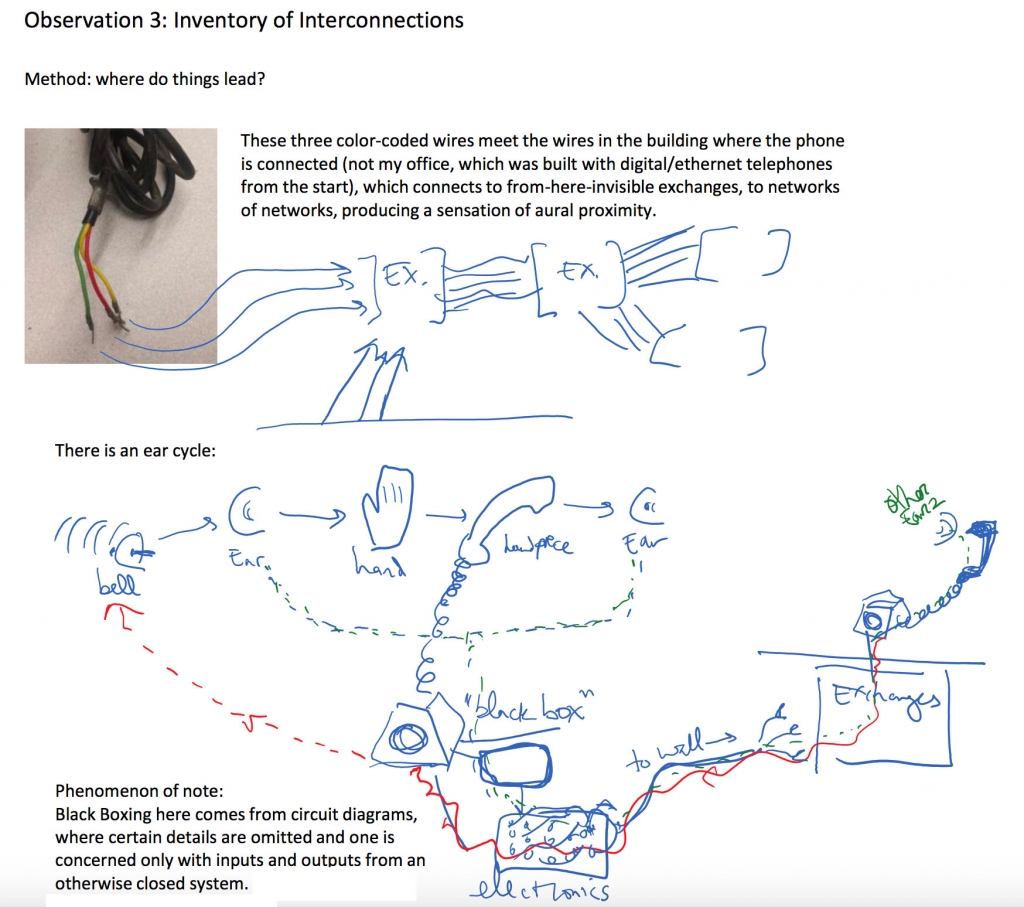 In the series of exercises — that those who are sticking around after this workshop will participate in — one of the things that I wanted to emphasize is that through your bodily interaction with the telephone and through attempts to take it apart or track it to different kinds of encodings of information and interaction, you’re guided to certain kinds of making sense, and giving foundation, and endowing certain abstract interconnectivities through the object. To take a very concrete example: how do you connect to someone at a long distance? Well, you have to find a number, a number something you find with your finger, and you are associate it with a dot which comes in a hole; there’s an act of rotation which is then converted into a temporal distance, which is converted through electromagnetic apparatus into a signal at an exchange; which then connects to other exchanges, and so on. By following those connections, which are mediated through bodily interactions, you get an idea of how something seemingly simple and anodyne as a phone number is, in fact, this highly mediated construct — mediated in the sense of going through many different media, that takes certain kinds of bodily knowledge and certain kinds of abstract knowledge and converts them into a unified and networked system. The three kinds of observations that that I laid out are the three kinds of inventories. 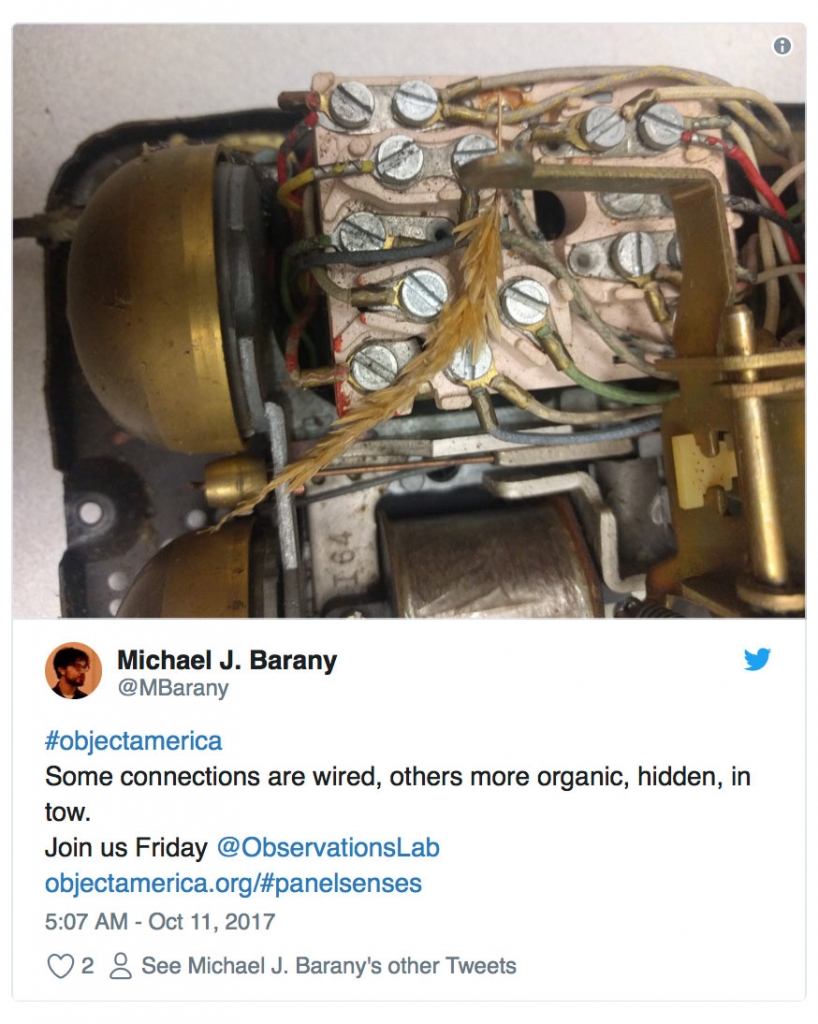 An inventory of numbers: what kinds of abstractions and representations on the device itself create or give access of these interconnections. An inventory of interconnection: where wires lead, where fingers lead, where mechanical exchanges lead. And then an inventory of interactional competencies. And if you want to see how not-obvious it is to dial and use the phone, just ask anyone born after 1990 how to dial the phone, and you’ll see it’s not straightforward. To draw this into a conclusion, the question is: how does our way of observing this Model 500 telephone give us access to a certain sense of what America is? How does this give us a certain kind of purchase on American history and culture and America as a polity? The answer that I think this way of observing the phone gives us is that, sense-making in these three different forms is all about creating a society of lived abstractions, of using mediation to convert abstractions into material connections and vice versa.

The changing technologies of lived abstraction are manifested through numbers, are manifested through language, but ultimately they’re about forming different kinds of communities and polities from the family, to the household, to the local community, and to the nation as a whole. It’s the embedding of the larger infrastructure and the larger Bell communications infrastructure, embodied in this particular object, that we can understand the formation of a certain kind of America through lived abstraction.

Michael J. Barany is a historian of modern science and mathematics and a postdoctoral fellow in the Society of Fellows at Dartmouth College. In his work, he attempts to find the connections between the dust on blackboards, the line items of budgets, the words in letters and journals, the conversations over tea and coffee, and the seemingly eternal truths that mathematicians spend their time creating and using in modern societies.