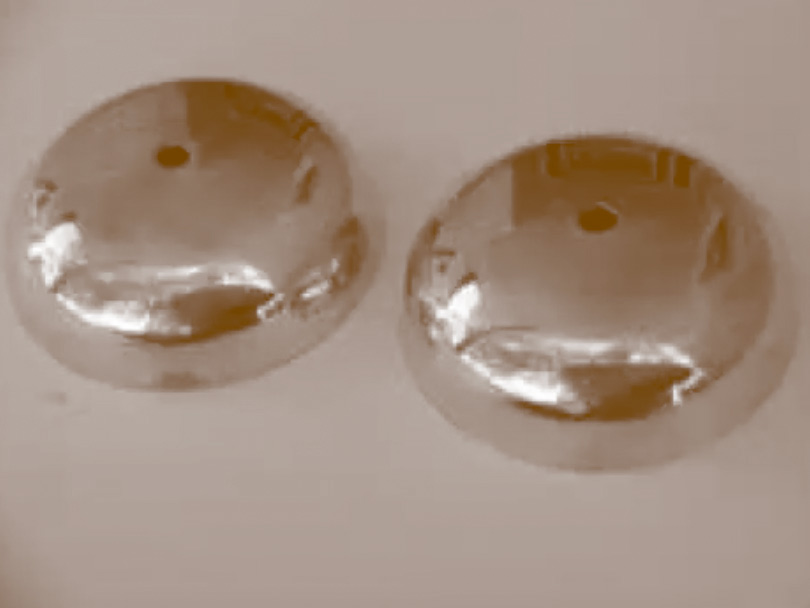 Hi from Berlin, I’m Mara Mills and I’m glad that I’m able to participate remotely in this project. I’m visiting the Epistemes of Modern Acoustics research group at the Max Planck Institute in Berlin this semester so I can’t be in New York. But I did have a lot of fun with my observations for the specialized instruments subgroup of this project.

I took the telephone itself to be my specialized instrument, and I decided that I wanted to focus my observation on sound: specifically, the sounds of this instrument, and the sound of speech as transmitted through the Western Electric 500.

Over the last two weeks, I’ve left a breadcrumb trail to my observations on my twitter account. You can look up my handle @maramills for more details, since I only have ten minutes to give you an overview of my observations right now.

Let’s start with the sound of this model 500 device, namely its ring. Immediately after receiving my phone in the mail I took a photo of it, and my office mate Jonathan Sterne flipped it upside-down and manually rung its bell. We took this recording. [plays sound]

How standardized was that ringing sound? I thought back to a field research visit that I had made earlier in the summer. Shortly after Selena invited me to take part in this project, Jonathan and I paid a visit to Bell Laboratories in Murray Hill, New Jersey, as part of a separate project we were working on, about the history of audio time-stretching and pitch-shifting. Bell Laboratories is now owned by Nokia, but it was originally the research branch of AT&T founded in 1925 on West Street in New York, and then moving to Murray Hill in 1941. A statue of Alexander Graham Bell stands at the entrance of the Labs, and the complex is organized like a hybrid of an office park and a factory (the so-called Idea Factory), with a massive square of buildings each with incredibly long hallways.

During that visit, I began thinking about telephone use AT Murray Hill. I remember when I saw those hallways that I had come across an unpublished poem in the John Pierce manuscript collection (at the Huntington Library where I was doing research over spring break) in which he mentioned how much he hated the telephones in his workplace – ironically, the very seat of telephone development. Pierce especially hated the fact that his colleagues would drop everything during a meeting if they heard their phones ringing. Here’s a fragment from the unpublished poem:

But how many times have I sat through a conversation
Which would have been boring if I had heard both sides,
But was really tough because all my host said was yes,
yes.
I have known men in the hall to run like startled
Harts (is that the true poetic figure?)
When their bells jangled. I have known beyond that
Men to rise from conference when a distant distinctive
Tinkling claimed them, and run glassy eyed and fated.

When I visited Murray Hill and I saw the long hallways, I couldn’t imagine how anyone would have known when their particular phone was being called. If all of the rings were the same, how would you have known which ring reverberating down the hall was actually your phone.

As a third observational practice (the sound recording and the field visit were my first two practices) aimed at understanding the ring of the 500, which would’ve been the model familiar to Pierce, I reached out to one of his colleagues, Robert Lummis, who lives not far from me in New York.

I did this at the end of the summer before departing for Berlin. I couldn’t talk to Pierce because he’s no longer alive. So I asked Lummis, how did he know his phone was ringing when he wasn’t actually in his office, say if he was in a conference down the hall? And he replied to me, via email:

“At the Murray Hill labs there was a stock room that was accessible by all Members of Technical Staff… It stocked many of the parts made by Western Electric including about 6 or 8 differently tuned telephone bells. Just the metal dome that makes the ringing sound when it is hit. 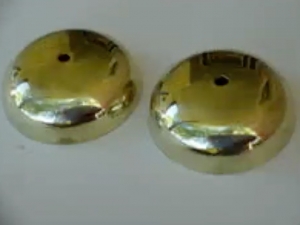 They look like this… and he sent me this image to the left. A phone normally has (or had) a pair of bells with different frequencies that were struck alternately by the ringer.

People would “customize” their phones by replacing the normal pair of bells with bells from the stock room with an unusual pair of ringing frequencies. And, if you installed two bells at the same frequency, it made quite a distinctive sound. So many distinct ringing sounds were possible. I know because I did it. You really could know whether it was your phone ringing vs. somebody else’s phone when you were down the hall.”

What is especially fascinating about this anecdote is that handset customization is precisely what AT&T prohibited all other telephone users to do. Other telephone users had to use the standardized sound, although to some extent they could control the volume of it. There were even lawsuits about handset customization, for instance the famous Hush-a-phone lawsuit that ultimately helped bring the monopoly down.

The second half of my telephone observation entailed observing the sound of speech through the Western Electric 500. The handset I received through the mail had a cut cord, and anyway I am in Germany where the utilities outlets are completely different, so I could not engage in firsthand observations of transmitted speech.

I collected a series of lists of test words and test sentences that were historically used by WE and Bell engineers to test the articulation, or intelligibility, of their phones. You can see these lists plus links to the primary sources (mostly historical articles) if you follow the thread on my twitter account.

To give you a few examples:

#ObjectAmerica
Testing the Phone with Nonsense Monosyllables:
Can you hear siz
These sounds are lun
Try to hear chuv
You may perceive jok

Lists of questions were also used to test the articulation or intelligibility of the telephones. Starting in 1929, there were hundreds of these questions in different standard lists. But I’m just giving you examples here — there’s lots more on my twitter account.

For instance, What are some personal characteristics of the people of Japan? What candy is black and good for colds? The name of a famous Indian tribe? Why is this building lit by reflected light? Here, the color would be read out as a question and the receiver would have to answer it, and if they were able to answer it, the quality of the phone would be judged as adequate.

Now, obviously looking at these lists, you know, even in their own time, they were criticized occasionally for being too New York focused. Certainly today, the content of these questions gives us a sense of American concerns and biases in the interwar and World War Two period. Many of them would be difficult for people to answer today. The words and the questions themselves obviously presume an English language user of the model 500. This phone was tuned to English.

Later, after World War Two, they began testing the articulation of phones with lists of spondees: things like duck pond, eardrum, inkwell. They also began to create what they called phonetically balanced sentences: sentences that included all of the phonemes of English in the relative frequencies in which they appear in the language. These are evocative sentences on their own, but they’re also sentences meant to produce standardization.

There’s a tension between the sort of poetic evocativeness of the sentences and their actual purpose, which was a standardization of the handsets, especially a sort of minimal articulation and minimal intelligibility that a listener would accept, so that the phone call could be as compressed and cheap as possible. So things like feed the white mouse some sunflower seeds, glue the sheet to the dark blue background.

Feed the white mouse some flower seeds.
Glue the sheet to the dark blue background. https://t.co/Wj2GnIGC9R

As I was collecting these lists of ways that transmitted speech was tested and also molded and also constrained and designed for the phone, I came across a couple of other lists—again, you can find the primary sources, the pamphlets that come from the Hagley archive, on my twitter account—lists that were used to train telephone operators to speak in a particular way on the telephone, to speak clearly, to speak quickly, and to have what is known as a voice with a smile. And I add these as an extra, final slide. Ellen Lupton, who launched us on this project and who chose the Western Electric 500 for us as our sort of canonical American object — this ergonomic, standardized, mass-produced object — has written about the voice with the smile and the affective labor that these operators had to perform via their voice. So phones are standardized with test sentences, human speakers are standardized also by practicing with their own sets of test sentences.

I learned in doing this research, curiously enough, that phoneticians and speech therapists like Edward Wheeler Scripture also developed test sentences to cure people of stutters. As someone who spent years in speech therapy for a lisp, this was of particular interest to me. Scripture in the mid-twentieth century would actually ask people to read out sentences over the telephone in a process that he called “dry telephoning” as a procedure for curing stuttering. Curiously, thinking of our task here of describing telephones, he also asked his patients to observe and describe telephone sets, possibly Western Electric model 500s, as another form of stutter care. So here we see observation as a mode of training. He would tell stutterers not only to read sentences over the model 500, but to describe the telephone’s appearance, its use, its faults, and its history to practice talking over the phone—“dry telephoning”—while describing the telephone itself.

All of these observations that I’ve made lead me to ask what are we doing when we’re describing a telephone? What we are doing when we’re describing this telephone, this canonical, American twentieth century telephone? Our descriptions I think might be therapeutic in some contexts, but might be critical in others. They might be poetic, anthropological; they might be forms of mass observation. They might also be modes of standardization. I’m sorry that I cannot stay or be in the room with you and hear the other presentations, but I look forward to hearing them all once they’re placed on the website. Thanks.

Describe an object placed in front of you using single words and proceeding systematically; for example, if a telephone is placed before you

Mara Mills co-directs the Center for Disability Studies at NYU. Her first book, forthcoming from Duke University Press, examines the history of speech and hearing research in the Bell System. She is currently working on the history of optical character recognition and, with Jonathan Sterne, the history of audio time stretching technology.