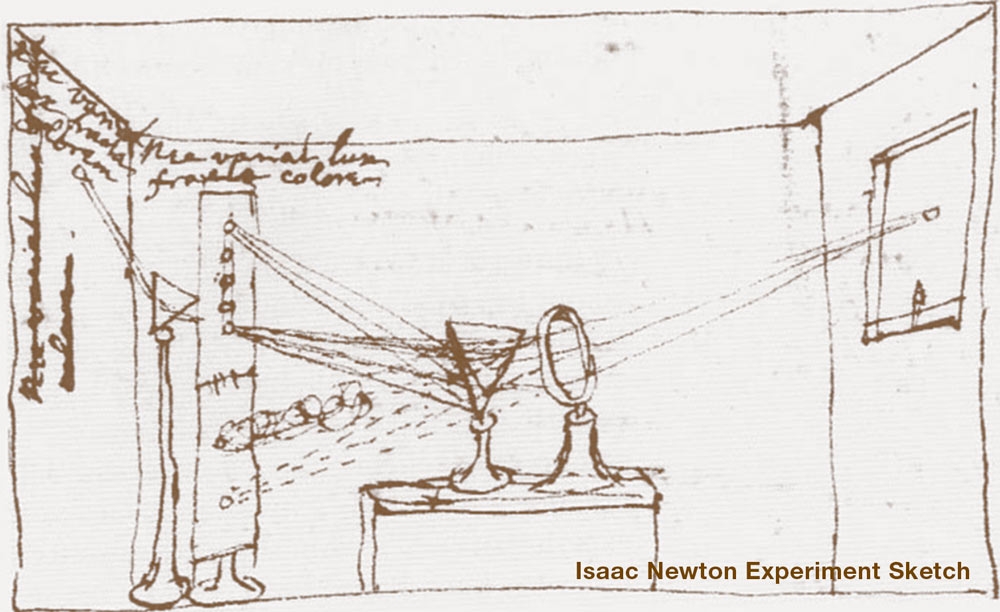 [Transcript of video]
(Could we use an image of the instrument as preview picture and in the article?)
I use instruments to see things that we cannot see with our eyes. For example, in Greenland or in the Antarctica we see that snow and ice have relatively white surfaces or bright surfaces that reflect a lot of the solar radiation. But of course, if they get darker they absorb more sun. We all wear black stuff in the summertime, we get very hot.

There is also a process called darkening which doesn’t happen in the region of the spectrum that we see. For example, if you have soot or dust particles in the snowpack — it gets darker, it melts faster. That is observable very easily by everybody, but when you have a grain size changing because of the melting and refreezing cycles, then it is more difficult. Grain size — as they grow — tend to absorb more solar radiation and we don’t see that effect. Bottom line, a snowpack that is absorbing a lot of sun energy could look very bright to us and could absorb more energy than actually a dirty snowpack — it depends on the level of dirtiness.

We do all these things, we have satellites and we have special instruments. One of the questions that I was debating — and I’ve been married with somebody who studies art history & architecture, and also, as an Italian, I’ve been growing up with the idea that art is very important — 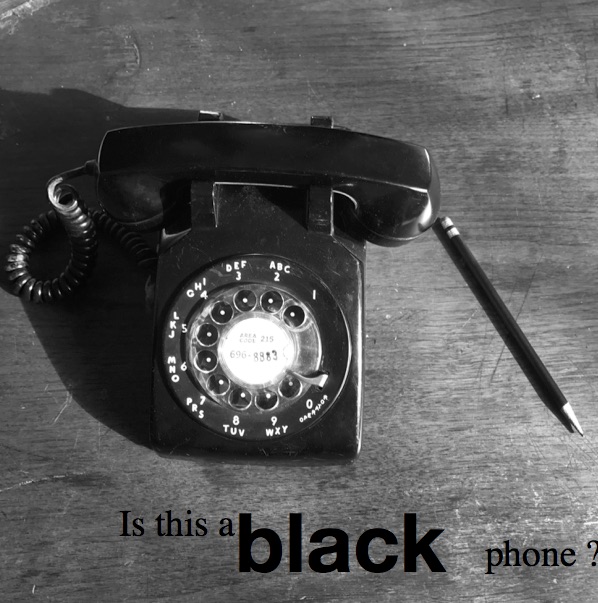 why is a white piece of panel seen as art? We have discussions about the eye of the beholder and all the different art theories. I thought to start by mixing a little bit of this and ask: Is this really a black phone? My question is from a scientific point of view. I also want to be able to be provocative with the people who do art theory, and I use my methods to test whether this is a black phone.

I was mentioning very briefly the idea of the spectrum. We know that the light that we see — even the white light — can be decomposed in several colors: the famous prism effect, that we see walking in the streets. 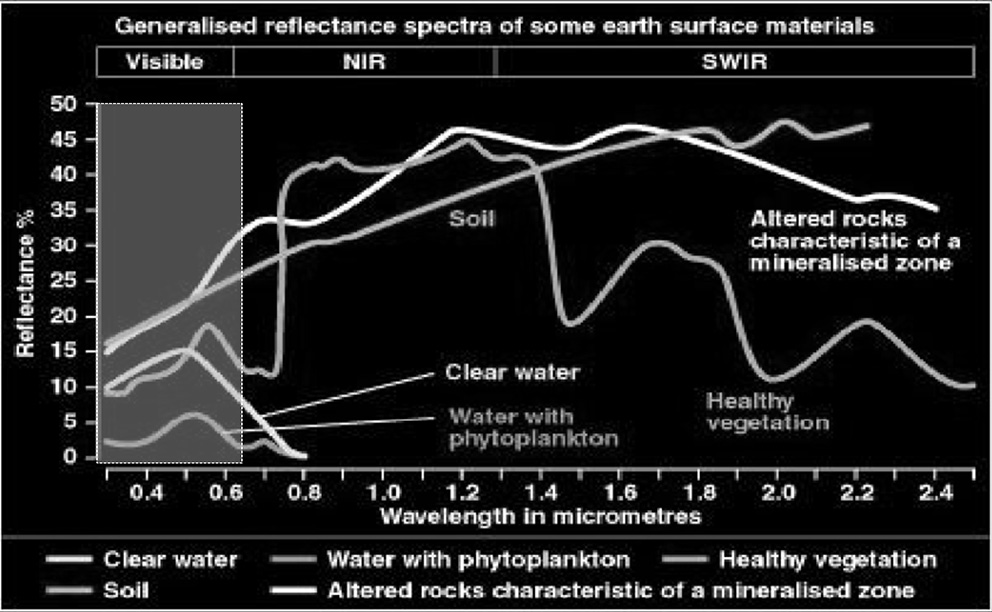 When the sun is hitting the edges of your windows, you see a beautiful rainbow on the floor sometimes. That is not you hallucinating, that is basically the light refracted by the mirror.

I found this extremely complicated but beautiful chart that explains the electromagnetic spectrum, which is basically largely outside of what we see. This chart was found in the corridor of Los Alamos National Laboratory around the mid 40s. What we can see about the spectrum is really tiny. Thinking about Blade Runner,  I see things that you humans can’t even imagine. That is what sensors and satellites do.

I calculated that basically we see 0 . 0 0 0 0 0 0 0 0 1 percent of the entire spectrum. We miss a lot of information. What we see is actually light reflected by objects. If a chair for example, is reflecting more dark colors we see more dark. So what we actually see is the light that has been not absorbed but has been reflected in our eyes.

If you look at this chart — the soil for example or even the water, in this case, this is actually a peak. This is where we see the blue. There’s blue, green and this is red in our world. You can see the blue, the water appears in the blue because it reflects more blue and green and it really reflects very little red light. The same thing is with the soil. You see the soil is slightly dark and vegetation slightly dark.

Actually, if you take a picture of a tree — and this is basically the amplitude image of RGB — it’s a black and white conversion from our camera. 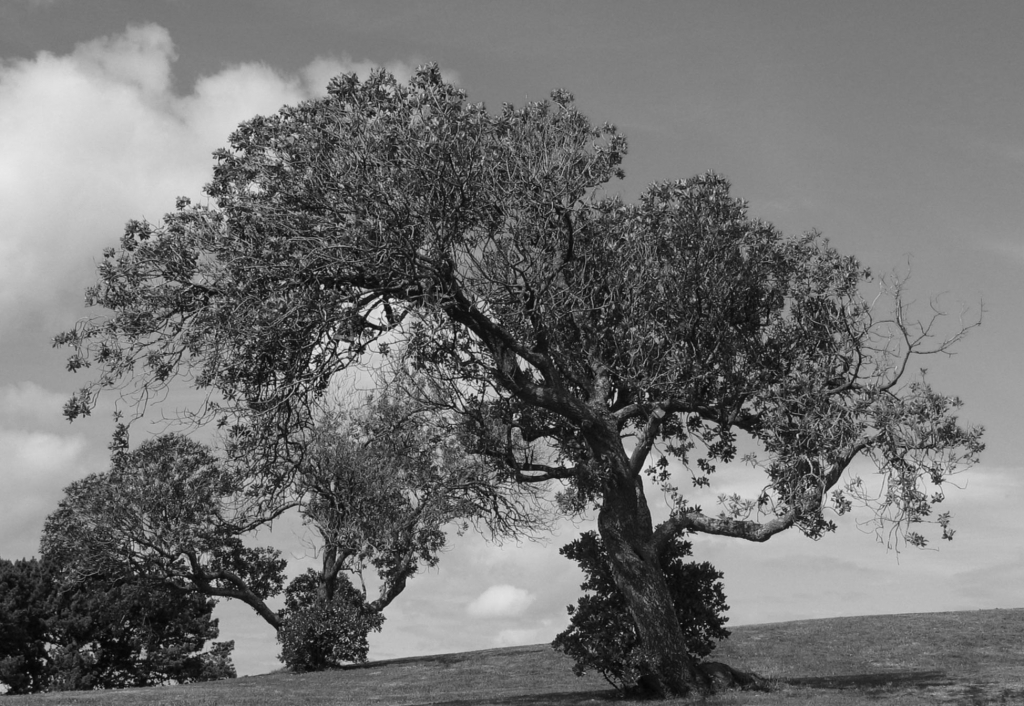 This is the picture. If you take a picture in the infrared, which is slightly far on the side of what we can see in the red — but it’s very very slightly far —  this is how the tree looks like. Trust me, there is a world that some animals can see where trees are brighter than snow. And snow gets very dark in these wavelengths, so you can actually flip the idea that snow is bright and trees are dark and live in a world where snow is super dark and trees are bright. 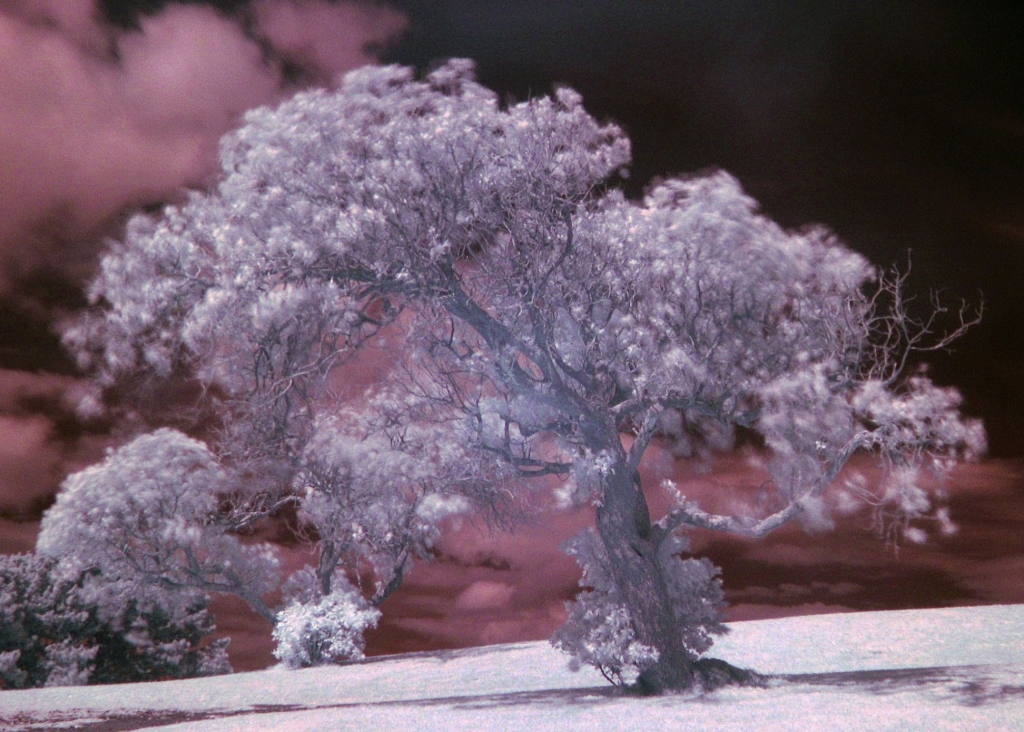 Based on this, I was asking myself: Is this really a black phone? How do I define a black phone? To me, something black, of course, is a definition of all the values. New Yorkers like to wear black. In this case the question is more like: is this phone really black where we see it, or is also black everywhere else? I put a hat on the side, Patrick’s hat. Patrick was my student — a post doc. (It’s been a long journey with me on this. Thank you for coming, Patrick, I put you on the spot.)

I measured with a special, a special instrument which is relatively expensive — about one hundred, one hundred and twenty thousand dollars — that allows you to actually calculate how the light is reflected by the objects at different wavelengths, 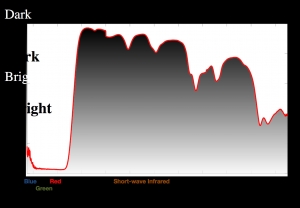 in different colors even where we don’t see them. This is what we call a spectrum, which is a spectral fingerprint. Every material has a different spectrum. It’s like a fingerprint, it’s like a snowflake. Even the same material can change or respond depending on the phenology or the state. It’s really a dynamic thing. 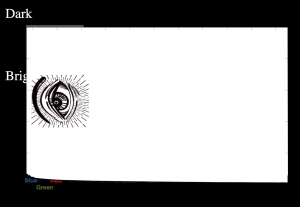 So in this case, the hat had a very low reflectance, you see these means dark, but then as soon as you started going in places where we don’t see, it really jumped up. You see I tried to overlay also the fact that there’s black at the bottom and it gets brighter at the top, so the top line – the red line – is really telling you how the hat should look like at that specific wavelength.B

Bottom line, if we were looking at the hat in the same way that we were looking at a tree with an infrared picture, this is how we look at. It’s not really a black hat — so, is this a black phone? When I measured, I was actually expecting something different, I was happy to say this is not a black phone. This is something that we think, we perceive it as black, our senses are fooling us, we need instruments, there’s a lot of speculation. I was wrong. So this is actually the spectrum of the phone. You can cannot see it, and I decided to keep this track here but this is the field. Compared to the hat, this is how the light looks like, and this is the phone.

Now, what does this mean? We have speakers from science materials, we have writers, and of course our colleagues. But what does it mean? It means that, I think, when you look at things — this is my take home message — when we look at things we are, of course, strongly driven by our senses. 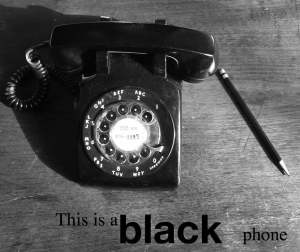 The way I see the world — the way my group and my people see the world in our work — is what we are questioning every time we think of a color, or we think of a brightness, or of a darkness for an object. We do know there is realm of colors. And it’s really not kaleidoscopic in a way that is colorful. But it is really fascinating that whatever we feel, we see in them might not actually be in reality what happens. Why is this important? If I see a snow pack that is white, I think, that is no matter because it’s reflecting the sunlight.

But what is it really absorbing? That changes completely the physical processes. I do believe that this is also important when we think about how we feel when we see a white phone? Would we feel that a black phone is more elegant? I can think about movies in the 50s, everybody was so tied up — picking up a black phone. I imagine, if the phone really changed color while you’re talking on the phone and your tuxedo wasn’t black anymore — that would really change and shift some of our social base and how we see society.

I’ve been also thinking about a couple of things that are provacative. One of the things I did in the past was sonification — basically translate a data into sound. I took a gong play and I want you to listen how this gong sounds. How the phone — in its blackness — translates into the gong sound and resonates with you, make you feel the phone as a sound. So this is the gong. (*sound*) Nothing, nothing new. And this is basically the phone with the gong filter. (*sound*) At this point, the computer didn’t even have to go below the frequency that we can hear.

This is what we do and I think there’s a lot of potential for this — even for social implications. There is a lot of debate about immigrants and I don’t want to go political. I just became a U.S. citizen so I feel more comfortable speaking about these things. There is a lot of debate about social issues, racial issues and has always been. Let me tell you one thing: the color of the skin that we see in our visible wavelengths is completely different of what our skin will look like if we will see it in different wavelengths. My skin, in an infrared, is much darker than the skin of some of my Indian or African-American colleagues and students. This is very difficult to translate and to talk about, but somebody suggested maybe these protective mechanisms because of solar radiation comes through the infrared, so it reflect back even though we don’t see it.

It is really important to translate the fact that what we see is not just what is there. We should never really trust what we see completely. That’s my suggestion. Thank you very much.